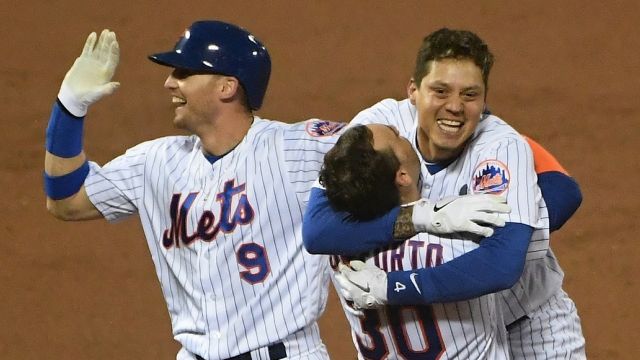 Wilma walk-off fever last night through the mushy gray mist, and I can’t believe I’m letting myself get amped a little for this team again.

Just to recap: since an 11-1 start, this Mets group has floundered and flopped like a fish on the sidewalk and literally has not won back-to-back games, the definition of mediocre. And geez has it been depressing. It was sometime around the Braves series at Citi that I started to suffer through the stages of grief; culminating in the acceptance of a team that will probably never be outstanding unless the ownership, you know, goes away forever.

So when Beanpole deGrom whirled his 13 K game Friday I was pleasant but not ecstatic. But now after a Wilma Walk-off is it possible I’m letting this team get me amped up again? No, probably not. They’re deeply flawed, structurally speaking, and not as fun to watch as a team like the Cubs or the Braves. Too bad I don’t watch the Cubs or the Braves.

But the Cubs and Braves don’t have Wilmer.

Go with me on this one, because it has been my feeling for quite awhile, and it’s a little out there but if you hear me out you’ll probably agree.

Wilmer is the Soul of this team. Don’t know when it started, but that fateful night against the Padres in 2015 sure didn’t hurt his soulfulness. That raw-nerved night was like someone opened the compartment of a powerful electric machine and futzed with the wires, causing sparks and making the machine spin out of control. Wilmer was caught in the middle of something, and somewhere along the way developed into what I can only refer to as “soulfulness personified”.

He’s like the Ringo Starr of the Mets. Not the most talented but could you imagine the Mets without him?

He’s the Soul. The minute he is traded or fired or god knows what (knowing Wilmer’s penchant for the unreal, he will probably be brought down at the gates of some inter-dimensional portal by a two-headed dragon) this team will lose it’s soul, and things will feel very different. The 2015 vibes, the ones that echoed and bounced off the cave walls throughout 2016 and helped get them to a Wild Card game, the ones that were faintly heard from a distance in 2017, the ones that seemed to come right back and plop themselves into our laps during 11-1, will be gone forever.

Appropriation is cool, isn’t it?

I found this picture online last night and thought it would be fun to talk about. First off, this thing has compelling composition: our friends Amed Rosario and Juan Lagares draw the eye up while at the same time our friend Michael Conforto draws our eye away – towards the left of the frame – as he walks away from the jumping dudes, creating a nice contrast to the whole thing. Second, our friends Mr. Rosario and Mr. Lagares are overlapping with the Marlins inane #justgettinstarted, which is actually based on a song by someone named Poo Bear (?) with a feature by DJ Khaled, Nicky Jam, and Kent Jones, meant to drum up some excitement for a rebuilding Marlins team. Whatever. Font is cool though. This overlapping juxtaposition between the Mets’ success and the #justgettinstarted logo is what I want to talk about.

Artists like Rauschenberg and Warhol appropriated all the time, taking objects thought up by other people, twisting them slightly to make them their own. To me, this is when art became officially Modern, capital M. An art history major would probably disagree with me, but when Duchamp walked into the Society of Independent Artists salon in 1917 and kluncked this thing down on the table…..

…you can’t deny that we had just been dragged screaming and leg-kicking into the 20th century.

Now, this “Jumping Dudes” photo isn’t appropriation exactly, because the Mets have not taken the #justgettinstarted and called it their own. We as fans haven’t done this either. But this photo is an art-piece because it has taken two images and juxtaposed them to create new meaning. Much like the Endy Chavez “the strength to be there” catch from 2006, this photo has come to mean something else. The Metsies are 9-1, winning like every day. They have the confidence and poise that comes along with winning. Things are going pretty well, and it feels like it can’t get any better than this, right? Ah, but according to this image, they’re #justgettinstarted. Keep watching, baby. There’s more to come, it says.

This is like a flat, emotionless, dream-state of a season so far. Maybe because I spent the first week in Italy? I don’t feel anything like I suppose I should for a team that is 9-1. Perhaps it’s “other-shoe-to-drop-itis”, preventing me from feeling full-on euphoria. It’s also only April 11th. 9-1 is super, but 1st place in June with a 6 game lead would be better. Flatliners need to wake me up here before I end up realizing I never appreciated this wealth and good fortune. Why can’t I appreciate this? I told myself after 2015 and then after the struggles of 2016 and 17 that winning is a state you visit, not live in. And try to enjoy your trip while you’re there. What kind of fan truly appreciates their team’s success in the moment? None here, I dare say.