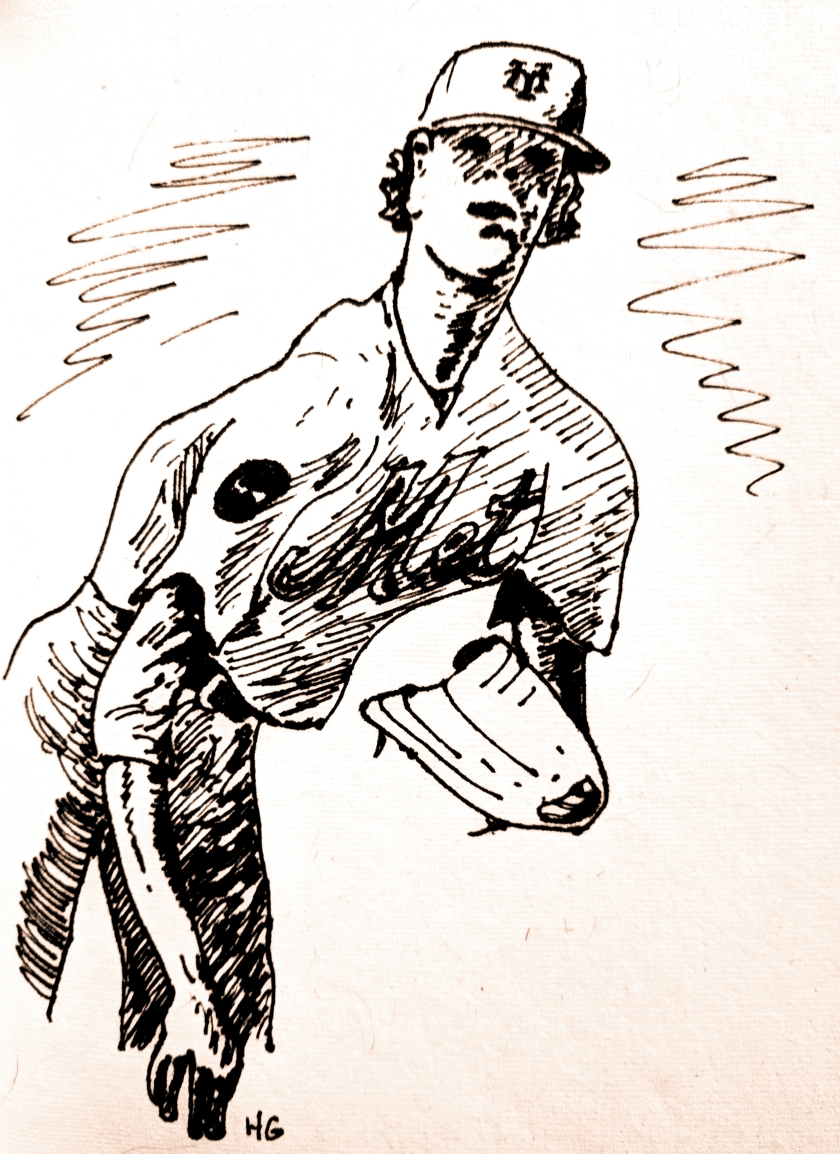 “I thought he was ok” says Mick.

Turns out “Hairless deGrom” is just as fun to draw as before – it’s the lankiness duh. 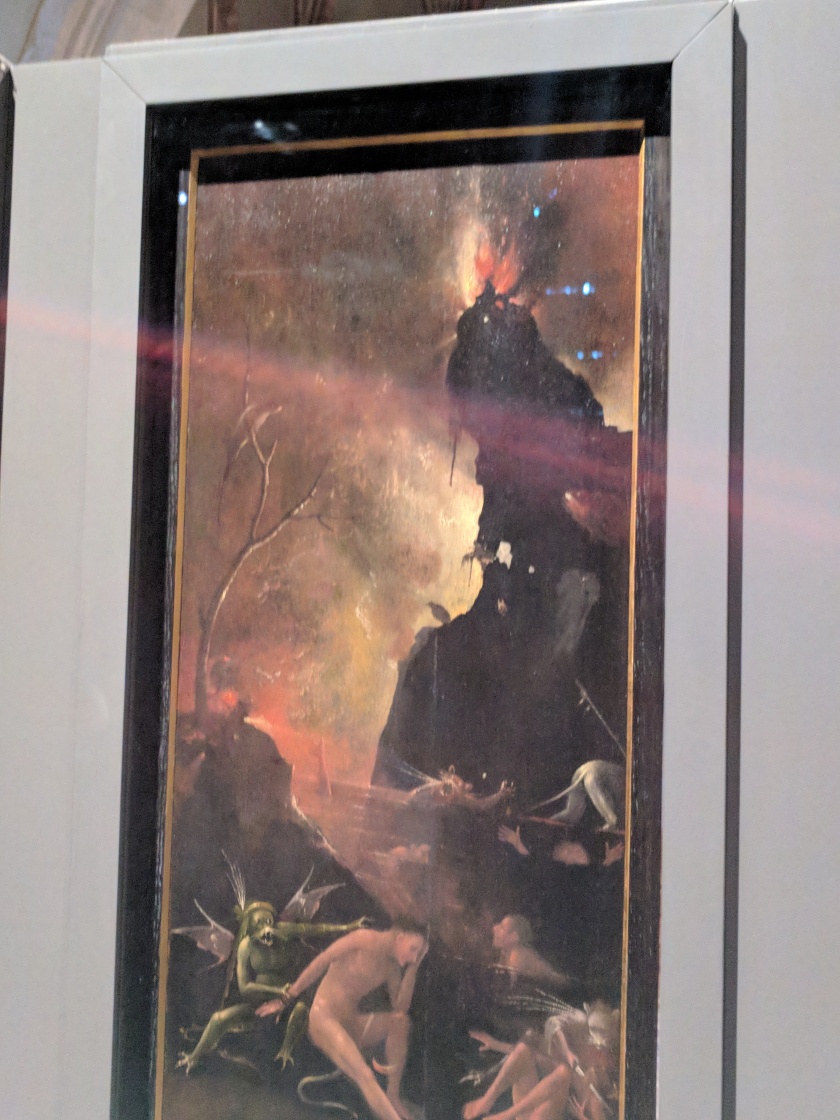 Just got back from visiting the Gallerie dell’Academia and this killer Bosch painting is stuck in my mind – I wanna run off and look up Heavy Metal magazine covers now.

Ok I did it…not as inspiring as I thought. Moebius is the man though.

They showed the backs of some Bosch paintings and I was mesmerized by their abstraction-ism (not a word). Check it:

Bosch was seriously Pollock-ing (also not a word) out on these babies. Proto-Abstract Expressionism! Isn’t art fun?

The Mets are off playing in another reality right now – a reality only available through the portals of screens – so  I wanted to kick this blog (I hate that word) off with some sort of travel log in which I effortlessly blend Mets stuff with travel stuff but I don’t think that’s gonna happen now oh man someone is singing outside my hotel window I’m gonna check it out. See you in a week!

How am I supposed to pretend… I never want to see you again….

Random lyric for Opening Day 2018, but it is not relevant in this case because I don’t need to pretend that I hate baseball. Searching for an “it’s back, baby” gif and I see Fat Bastard “I want my babyback ribs” and a bunch of “i’m back baby” gifs which also aren’t relevant! Whatevs.

Mets won! I followed the game through a series of drip-drip water torture tweets while lounging on my Venice hotel bed, although in this case (and any case when the team is winning a game) I’ll open my mouth under that drip-drip water torture and wait all day. Syndergaard struck out 10 Cards. I didn’t see him with my eyes but that seems good, no?

This opening day was like a throwback, against the St. Louis Cardinals, like a 1985 Opening Day kind of throwback. That game was on YouTube for awhile in 2015 and I used to watch snippets of it while waking up in the morning. There’s something about the bright blue of the Mets unis on a cold early April (or this case late March) day that feels singular – and when you see their breath? Even better!

Anyways, Mickey Callaway seemed to have a successful first game, and he’s getting a lot of good press about batting the pitcher 8th, which is weird because Terry used to do that all the time but now Mickey does it and he’s a genius?  But why complain, cause they won!

The airplane feels like a collective breath being held. With ears always muffled and feet nowhere to go. Sortie and exit next to each other on the sign, so I assume they both mean the same thing.

I wonder how athletes deal with plane rides so much. I am drained and achey. I guess it becomes a part of their routine. It’s the wonder of the human body I think, it can do anything if it’s in a routine. I’m just imagining Noah Syndergaard, even in first class, with his legs needing to stretch and his back a little stiff.

They probably get to walk around a lot more on their flights. This is purely me speculating this but I feel like they literally have a whole plane to themselves right? And there are only 25 players on a roster so does that mean there a lot of empty seats on the plane? I mean there’s the coaching staff and the training staff but that’s what, like another 8 guys? There’s probably a lot of empty seats. I would imagine that to be a little eerie. Weird vibe to feel right before playing a baseball game.

There is something about the process of traveling, with it’s repetition of tasks, that every travel experience seems to blend into a large blurry mush after one has finished travelling. We have just sprawled out in our Venice hotel room after an ungodly 14 hours (yes, typing that out makes me pause) of travel. Two planes, a boat, some speed-walking through a beautifully-lit Charles De Gaulle Airport at 7 in the morning (more on this later), more speed-walking through a Venice airport and finally some just plain standing around while our room was being finished, we have begun our honeymoon.

There is a rush of metal and plastic and advertisement posters that lay out one after another, and signs with letters and numbers in seemingly random colors, and handrails and charging stations, and clunking noises made by  suitcase wheels, and clear glass walls and clear glass elevators, and silver metallic bathrooms that have just been sprayed with bleach. This is the rush of things moving by you when you are traveling, the blurry mush.

I said I’d talk about the light in the Charles De Gaulle airport, and this is what I mean:

That’s a poor example but you can see what I’m getting at, maybe? The whole thing is glass and spirals out in all directions, up and down and side to side. And there aren’t any buildings around the airport, obstructing light. So the 7am cloudless sunlight poured into this place, coming through the glass and getting more intense even, reflecting off walls, casting long intensely black shadows and creating an incredible atmosphere that I will forever remember as the “Charles De Gaulle Airport Light”. We ran through the place for our connecting flight so it wasn’t fully appreciated. Although I just wrote this about it so I guess it got it’s due.

**note: this was originally written March 27, hence the title.

Hello. This has been brewing only for a day, so bear with me. I wanna write a journal or something, something that feels tossed off and like I didn’t try that hard writing it. But also has a lot of information and facts about random stuff that I like, but it all kind of comes together. And I want it to be about the Mets. So every post is essentially a “recap” of the previous night’s game, and there’s a theme or something that I’ve worked through beforehand, so it all gels together as a kind of personal journal/sports piece. Make sense?

This all sounds very 2006 or something and now I’m having second thoughts.

I have a real problem when I write sometimes in that I tend to write in someone else’s voice. Like I just watched the first episode of that Garry Shandling documentary and now I’m writing this and forcing Garry’s voice away from these words, and it’s pretty fucking difficult.

I am compelled to pepper the attitude of this passage with the kind of self-deprecation and self-awareness that Shandling was known for. It would probably make this more interesting to read, but ultimately would do me as a writer no favors, stunting my growth.

I need to try and alter my voice when I write, but still make it me. I go back and read the stuff I write and it seems so heavy handed. How do I keep it light?

Ok so I have a theory about the heavy-handed-ness in my writing, and I think it’s this: I think it has something to do with my tendency to see the world in very black-and-white terms, like it’s either one thing or it’s another thing. It’s something that I’ve been aware of for at least five years, probably more. I don’t really know how to alter my perception of the world other than just to be aware of it, which I guess is half the battle right? I’m aware of it, and maybe that will change it? Maybe it will improve my writing?

Opening day is two days away.